by Sons Of The Sun on FatCat Records 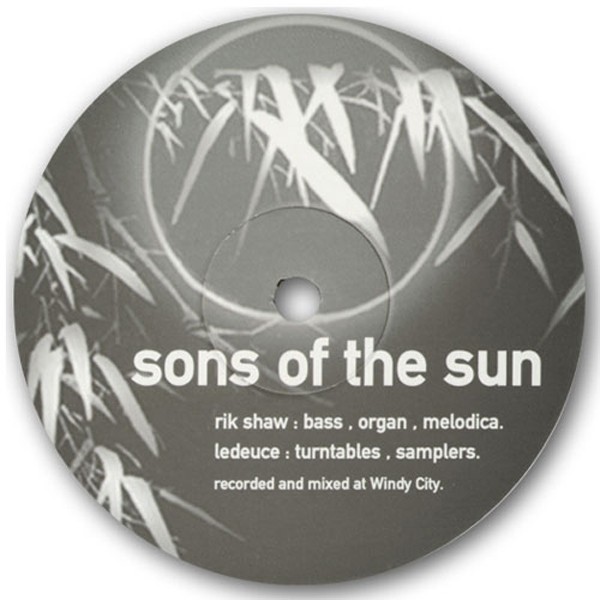 Former members of the Chicago-based ROME, one of the US post-rock's most influential units, Rik Shaw and Adam LeDeuce splintered off in late '97, to form Sons of the Sun. Maintaining their interest in a distinctive mix of electronics, guitars and dub methodology, their debut Fatcat EP sees them experimenting with ambient soundscaping and and, on the stunning "Angkor Thom", moving into the realms of fractured, micro-programmed electronica.

Rik Shaw Plays bass, organ and melodica. Founder of the Deadly Dragon Sound System, a crew of DJ's that spin dance hall, dub and jungle. Previous bands include the Moonmen, The Deuces and Rome. Has recorded with Trenchmouth and the Eternals, and has performed with Mother Country Death Rattle. Currently DJing at a variety of venues and recording new material in the studio with LeDeuce as Sons of the Sun.

LeDeuce Plays turntables and samplers. Has developed a form of DJing called "16 style" which consists of layering records playing at 16 rpm, creating textural soundscapes. Has done sound work for numerous films and art installations. Previous bands include Condeucent and Rome. Has recorded with Booby Conn and Disarray and has performed with Gyla, DJ Scram and Chinese Johnny as well as performing solo. Currently DJing at a variety of venues and recording new material in the studio with Rik Shaw as Sons of the Sun.