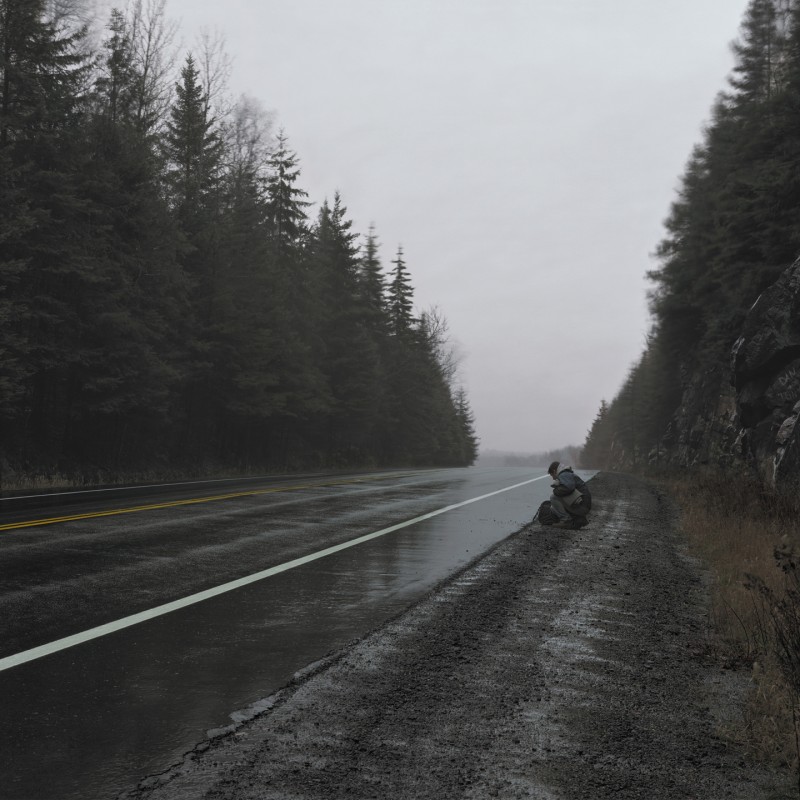 Montreal-based Frenchman Olivier Alary is a highly talented composer, who has previously collaborated with Bjork. Having
released albums on FatCat and Aphex Twin’s Rephlex label under the lushly-orchestrated, experimental pop guise of Ensemble, over the past five or six years Olivier has moved away from that song-based project to focus on composing material for a stream of films and artistic collaborations. In June 2016 Olivier signed to 130701, and this album – a compilation of film soundtrack work - marks his debut under his own name.

Olivier completed a degree in architecture in the late '90s, then moved from his native Toulouse to London to study electro-acoustic composition at Middlesex University (specialising in algorithmic composition and programming) and begin a musical career. Initially working under the name Hearing Is Our Concern, he was one of the first people FatCat ever received a demo from. We talked for a while about a release, but in the end nothing happened. In '98, the name was changed to Ensemble and a first album, 'Sketch Proposals', was released on Aphex Twin’s Rephlex label in 2000. The record gained a small, dedicated audience, including Björk, who was impressed enough to draft Olivier in to work with her. In 2002, Ensemble's remixes of Bjork's 'Sun In My Mouth' and 'Cocoon' were released as b-sides. Olivier then co-wrote 'Desired Constellation' on Björk's 2004 album 'Medulla', and more remixes on her 'Triumph of a Heart' single. In 2006, an eponymous follow-up to 'Sketch Proposals' was released on FatCat, featuring vocals by Chan Marshall (Cat Power) and Lou Barlow (Dinosaur Jr.), with arrangements by Johannes Malfatti – who also contributes on this record - performed by the Babelsberg Film Orchestra. In 2007, Olivier contributed a remix on The Twilight Sad's 'And She Would Darken The Memory', and in 2010, a final Ensemble album 'Excerpts' was released, again on FatCat.

In 2007, Olivier’s director friend Yung Chang asked him to score his feature-length debut, 'Up the Yangtze' which premiered at Sundance. The film was critically acclaimed and became a reference in the field, opening up a natural transition into film music for Olivier. Soon afterwards, a number of other directors and producers began contacting him to work on projects, and since then he has soundtracked more than twenty feature-length fiction films and documentaries, several of which have received prestigious awards and screenings worldwide (Cannes, Berlinale, Sundance, TIFF, Locarno). As the album title alludes, ‘Fiction / Non-Fiction’ is a compilation of this film music, dating from from the past five years, none of which has been previously released. Carefully compiled by 130701’s Dave Howell, the record is far more than the sum of its parts and flows gorgeously from start to finish.

Olivier’s material here might sit somewhere among the likes of Jóhann Jóhannsson, A Winged Victory For The Sullen, Stars Of The Lid, and Set Fire To Flames, whilst having the same masterly ear for sonic detail as Oneohtrix Point Never or Tim Hecker, but throughout the tracks are imprinted with Olivier’s own, signature sound. This might be defined in the composer’s obsessive exploration of the “grey areas" between noise and musicality and in blurring the boundaries between what is acoustic and what is generated electronically. “I am equally influenced by traditional music (from both Asia and Europe), acousmatic music (from composers of the GRM) and post-tonal composers (like Julia Wolfe, Julius Eastman)”, he says, citing his music as a fusion of elements from these genres of music. “For me the texture of sound is as evocative as a strong melody or harmonic progression. I also love to blur the boundaries between the geography of instruments and music genre.” In parallel with his film work, Olivier has continued to study music and theory with various professors, in order to expand his skills and composing range. In 2008, he started taking private lessons and attending classes at the Montreal’s McGill Conservatory, and also followed Michel Gonneville’s analysis class at the Montreal Conservatory.

Largely self-produced, the material on the album was recorded at a variety of dates and locations, and utilises a range of instrumental set-ups. It features performances from the Babelsberg Filmorchestra, The Wroclaw Score Orchestra, Saint Stanislas de Kostka Choir, members of the Warhol Dervish String quartet, as well as pianist / arranger Johannes Malfatti, saxophonist Erik Hove and many other musicians from the hyper-dynamic Montreal music scene. With a broad pallette of sounds including accordian, saxophone, slide guitar, vibraphone, marimba, gongs, guitar, electronics, double bass, choir, flute, and clarinet, it moves from the sparse solo piano of ‘Qin’ or ‘Dancing Bottle’ to drone pieces like ‘Khaltoum’ and ‘Autodrome; denser, string-based arrangements like ‘Canon’ or ‘Yu Shui’; and a pair of separated minimalist twins.

‘Fiction / Non-Fiction’ opens with two tracks lifted from the soundtrack of Yung’s Chang ‘China Heavyweight’, a documentary about boxing, which won the prestigious Golden Horse Award (the Chinese equivalent of an Oscar) in 2012. Both tracks were recorded by David Bryant (of Godspeed you black emperor! and fellow 130701 act, Set Fire to Flames) at The Pines, Montreal. Maintaining the Godspeed connection, ‘Flooding’ , ‘Canon’ and ‘Yu Shui’ were recorded by Howard Bilerman at Godspeed’s Hotel 2 Tango studio in Montreal. These three tracks come from ‘Up the Yangtze’, Chang’s documentary debut. This award-winning film follows a family as their home is destroyed by the rising waters of China’s Yangtze River - a consequence of the Three Gorges Project, the largest hydroelectric dam in history. Elsewhere, ‘Dancing Bottle’ and ‘Autodrome’ come from the ‘Jo pour Jonathan’, which was directed by Maxime Giroux and represented Canada at the 2015 Oscars. Whilst ‘Epilogue’ and ‘Forêt’ are taken from Mathieu Denis’ ‘Corbo’ which, based on a true story, follows the last months in the life of 16 year-old Jean Corbo, the privileged but socially alienated son of a wealthy Italian-Canadian businessman, who became radicalized after a chance meeting with two young activists and died in a 1966 Quebec Liberation Front bombing.

The two minimalist ‘Pulses’ tracks are the most recent and the only material here recorded soecifically for this album and unlinked to any film. ‘Pulses (For Percussion)’ is a percussive study where a gorgeous polyrhythmic palindrome is transformed throughout the piece. The opening motifs played on gongs create a harmonic blur that becomes increasingly precise and resolved by the addition of Marimba and Vibraphone until a lyrical crescendo. ‘Pulses (For Winds)’ is like its ghostly mirror - a study for woodwinds using non-percussive instruments in order to emphasize the fragility of the patterns and their mutation from formless washes of tonal white noise to clear pulses.

With a beautifully broad range across the whole, these 17 tracks they shimmer and hang like a shifting series of little dreamscapes. Each track witnesses Olivier’s

‘Fiction / Non-Fiction’ will be available on vinyl, CD and digital formats. The CD and digital versions will contain 4 bonus tracksunavailable on LP. precision and attention to harmonic and textural detail, confirming his sheer talent at layering / arranging sound. From the rich, smoky, deeply atmospheric saxophone-led tracks like ‘Yu Shui’ and ‘Flooding’ to the lusciously-textured ascension of ‘Nollywood’ (the closest-sounding thing here to Ensemble), they showcase the emergence of a composer of considerable talent.
A full length of brand new recordings is planned to follow on in the second half of 2017