by Animal Collective on Splinter Series 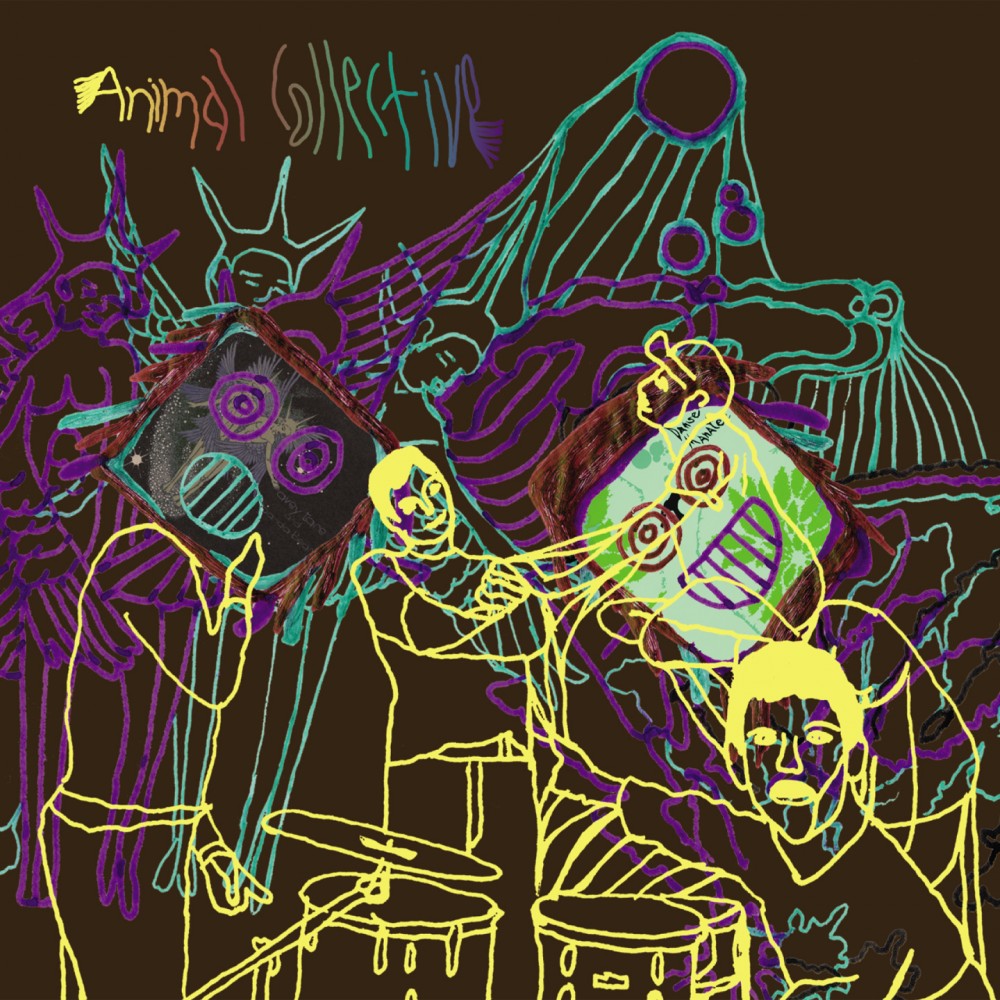 With the release of this double CD, FatCat are proud and excited to announce the beginning of our association with Brooklyn’s astonishing Animal Collective. In February 2003 we travelled to New York to witness a stunning live show, and then invited them over to Europe for a clutch of shows in May. Although performing as total unknowns, the band rapidly won over unexpecting audiences with sheer talent and the brilliance of their performance. Referencing points from Syd Barrett to Fennesz, Flaming Lips to early Bowie, their stripped-down, gripping, psychedelic set of songs - delivered using just vocals and 2 acoustic guitars - drew an ecstatic response, and generated a buzz of positive fallout.

Yet despite the evident appeal of their deliciously skewed songs, heartbreaking hooks and deep pop sensibilities, Animal Collective is clearly not a simple or stable ‘band’ proposition. Friends and musical partners since 1992, core members Avey Tare and Panda Bear came together in 2000 with the intention of moving pop music in a new direction that would emphasize sonic experience. Soon after this, they began operating as Animal Collective, an umbrella name now used for a grouping of four people: Avey Tare, Panda Bear, Geologist and Deaken, who play together under different names and in different configurations (anything between 1 to 4 people), and whose releases are prone to continual musical change: from beautifully skewed pop ballads to fiercely ruptured noise-squalls to tribal rhythmic work-outs to simple folk songs, to who knows where; from fully orchestrated group freak-outs to a the intimacy of an acoustic duo.

This double album serves well as an introduction point to the group, repackaging their first two releases which, whilst gathering a certain amount of critical acclaim in the US, had little or no distribution elsewhere. Described by TimeOut NY as “the discovery of the year…”, the Collective’s first offering was a stunning collaboration between Avey Tare and Panda Bear called ‘Spirit They're Gone, Spirit They've Vanished’, released on their own label (Animal) in August of 2000. Chiming laments for a childhood's end, the album opens with the phrase "want to hear a secret, I know one", suggesting these secrets just might be buried deep within the flocks of high frequencies, electronic glitches, bleeps and swells that follow. The duo's approach is similar to Love's (circa ‘Forever Changes’), with Avey Tare's picked acoustic guitar flowing in perfect syncopation with Panda's tumbling drum kit. But the layers of tonal and atonal electronics that fatten the thinner pulse of the songwriter's vision make this album resemble something closer to modern electronic composition. The songs range from speedy patchwork pieces to slower piano melodies, a somehow coherent yet very fragile brand of psychedelic music.

The band’s second album, ‘Danse Manatee’ (remastered for this release) was released by Catsup Plate in July 2001. The sound here is augmented by the addition of Brian Weitz (Geologist), who had started playing live with Avey Tare and Panda Bear, and these ever-developing live shows were the driving force behind the development of the material on ‘Danse Manatee’. A ‘live’ sound permeates the surface audio aesthetic here, but the more intriguing development is the music itself: Geologist contributes live electronics and incidental vocals; Panda is singing more; the whole thing is more organic, fleshed out, looser, whilst retaining the playful, melodic otherworldliness that characterised ‘Spirit…’.

‘Danse Manatee’ gathered more exposure as it was accompanied by a month-long US tour with their friends Black Dice. 2002 saw the release of a limited edition (300 copies), vinyl-only release on St.Ives (a sub-label of Secretly Canadian) called ‘Hollinndagain’, which was made up of live recordings from 2001. 2003 saw two further releases, ‘Campfire Songs’ - a collection of songs recorded live on a screened-in porch in rural Maryland, with the audible hum of the outdoors; and ‘Here Comes The Indian’ on Carpark’s Paw Tracks imprint label (which Animal Collective are running themselves), which gives an update on the electronic / noise / songs of ‘Danse Manatee’.

As far as peers and influences go, aside from the aforementioned, Animal Collective’s sprawl could perhaps be located alongside the inspirational energy of fellow American contemporaries such as Black Dice, Lightning Bolt and Jewelled Antler Collective; elsewhere, the digital noise & texturings of the Mego label; the freak-outs of ‘90s west coast isolationists like Caroliner and Sun City Girls; the minimalist post-techno structures of Kompakt; or back to '70’s European commune-music utopians like Amon Duül, Harvester, Can, and similar folk-psychedelic explorers; with the organic looseness of the best of the free and improvised music world. But despite this, it is Animal Collective’s natural affinity with pop music that makes up the crux of their sound. Whilst they may recall the likes of Barrett, early Bowie, Ray Davies or Arthur Lee, it’s without ever aping them or sounding retro. And most of all, in whatever guise they assume, Animal Collective always manage to sound like noone but themselves – stunningly unique and resonating with a deeply commited self-belief.

Like new label-mate Dorine_Muraille, Animal Collective are a perfect addition to FatCat’s Splinter Series - their grasp of pop hooks and dynamics being counterbalanced by a love of noise / friction and musical anarchy; their songs wavering on the tightrope between deeply affecting beauty and unrestrained chaos.